Here’s a Track of the Week from the guilty pleasures vault. It’s old, it’s simple and it’s of a genre you might call folk/pop. But don’t turn the web page just yet. Like many folk songs it’s a sad song; like most pop songs it’s easy on the ear. But it binds the listener to the torturer’s rack, ratcheting up the tension until the tendons tear and the ache of loneliness snaps into anguished loss. 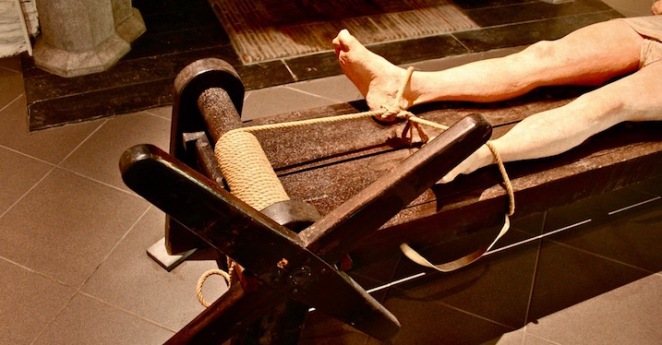 The narrator has been banged up in jail. Shortly after his release he bumps into Rosie, once his girl. She doesn’t recognise him for a moment. The rack wheel turns and the ratchet clicks once. It’s been a long three years. Time goes slow when you’re down river, locked away. But he still remembers the tune they used to sing together. As he recalls too many sleepless, loveless nights the ratchet clicks again.

He asks her why she didn’t write. She avoids his eyes as she says she had to mind her dad. They both know it’s just an excuse. The ratchet clicks. “But, just a line, babe?”, he pleads. She will have to tell him the truth. “Do you remember Ben?”, she asks. Of course he does, he and Ben went right through school together. And now Rosie is shacked up with Ben.

With that the ratchet clicks once more and his tortured body breaks. But he can not let her see his pain. If she could see the black chasm that has opened up in his soul she would be hurt, too. She would feel guilty about abandoning him to a cold concrete cell, ashamed that she hadn’t had the courage to tell him she had moved on. She doesn’t deserve that burden. It’s all his fault and he still loves her.

A few unguarded words spill from his lips. “Well, he’s a good man, Rosie. Hold him tight as you can.” And then the singer summons all his mental strength to build a wall between them, a barrier to hide him from her, to protect her from the sight of a man broken by his own thoughtlessness and stupidity. His goodbye sticks in his throat and as he walks away the pain, finally, overwhelms him.

Now listen to David Ackles as he tells the story in his 1968 single, Down River.

For many years Down River was Crotchety Man’s all time favourite song. The opening piano chords suggest a mood of quiet nostalgia. Almost immediately the vocals begin to tell a story. A bass guitar pushes forward, bubbling and bouncing a little too boisterously for comfort. There’s some light percussion but it’s so far down in the mix that the kit might have been in an adjacent studio. Slowly the story unfolds and, as it does, the tension builds. When the song reaches its climax and the emotional wave breaks a soft organ swell provides the pathos usually supplied by a string section. Then, in its wake, guitar notes polished smooth by electronic effects duet with an effervescent organ line, gradually fading away as the salt water hisses on the sand, retreats and fades away.

I still love this song. Although it’s filed away in a secret vault I really don’t feel guilty about it at all.

2 thoughts on “Down River”