One morning earlier in the week there was a knock on the door. I was up but not yet dressed. Opening the door I was greeted by a woman carrying a bundle of small, glossy brochures. It was cold outside and a stiff breeze ruffled my dressing gown. I feared I was about to be embroiled in a protracted conversation – the kind of conversation that starts with, “I’m not selling anything…” and ends with some unfortunate double glazing sales executive going away with a red hot flea in her ear.

But I was wrong. The opening gambit was something about local churches. God is very much alive in York and it was no surprise to find a mild-mannered evangelist on the doorstep. A cold-calling salesperson gets very short shrift at our house but I have more sympathy with well-meaning Christians even if I don’t agree with them. In fact, I quite enjoy arguing about whether God exists or  discussing some moral dilemma with them. It gives me an opportunity to put forward the other side of the argument without invading the privacy of strangers or boring to death those who are just not interested.

Not wanting to freeze, I invited the woman in. It soon transpired that she was a Jehovah’s Witness. Like all well-trained salesmen she insisted that she wasn’t trying to convert me but, nevertheless, did her best to show that my belief in science was just too ridiculous for words. Now, I welcome reasoned argument but the Witness’s approach is very different; it’s what the popular press calls ‘spin’. They carefully research the subject, preferentially select facts that support their view or challenge the opposing view, and appeal to your emotions rather than your intellect. This is cheating and it annoys me intensely. 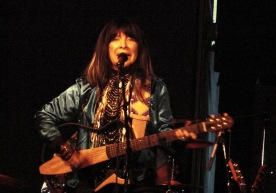 The outcome was inevitable. She stayed calm; I got quite angry. Neither of us changed our opinions one jot. I remained angry for a long time after she had gone. Now that I’ve calmed down that encounter with a Jehovah’s Witness reminds me of a piece by Leonard Cohen put to music by Buffy Sainte-Marie. It’s an extract from Cohen’s second novel, Beautiful Losers, and it’s called God is Alive, Magic is Afoot.

I’m choosing this as my track-of-the-week. I’ll leave it up to you to decide whether it throws any light on the big philosophical questions of life.

One thought on “Magic Is Afoot”