It’s Mother’s Day today and the obvious choice for the next track of the week is For a Thousand Mothers from Jethro Tull’s 1969 album, Stand Up. It’s a rip-roaring, defiant song in which flautist and vocalist Ian Anderson calls out to his mother (and father). “You had no faith in me”, he says bitterly, “but I have achieved what I wanted – recognition, fame and fortune – in spite of you”.

Perhaps that’s not the right sentiment for Mother’s Day but the song goes on to acknowledge that it was just that lack of faith in him that gave Ian the determination to succeed:

And unknowing, you made it all happen this way. 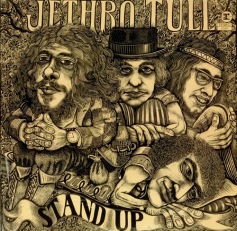 The rest, as they say, is history. Jethro Tull were active from 1968 until the end of the nineties recording and playing live. They have sold over 60 million albums worldwide, including 11 gold and five platinum. Ian Anderson himself is still recording new material (he released his latest album in May 2014). The Tull front man was given the “Prog God” award at the 2013 Progressive Music Awards ceremony and received the MBE in the 2008 New Year’s Honours list. According to Wikipedia, Ian and his wife, Shona, own a group of profitable companies, an estate on the Isle of Skye and a house in Switzerland.

So much for Mother’s predictions!