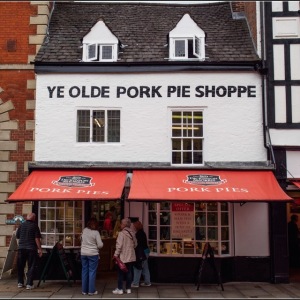 One sunny Spring morning Mrs Crotchety and I decided to drive over to Melton Mowbray and explore our nearest market town. There’s a very pretty area by the church but it’s not a particularly attractive place on the whole. It’s mainly known for pork pies (Ye Olde Pork Pie Shoppe is famous) and Stilton cheese. There was also a well-documented episode in 1837 in which members of the local hunt found several tins of paint and, literally, painted the town red.

It was getting towards lunchtime and we were looking for somewhere to eat. There are plenty of cafés in the town centre but they seemed to be mostly basic pie-and-chips establishments with little to appeal to our, shall we say, more refined taste. We did find a deli/café that looked nice but, although the opening times were given as 9 am to 4 pm, it was closed. Retracing our footsteps we finally settled on Miss B’s Tea Rooms for a sandwich and a cuppa.

Miss B’s is doing its best to be a traditional English tea shop. The building is old with exposed oak beams and the decor is distinctly old-fashioned. But the furniture is modern and my view was dominated by an unattractive 50’s-style chiller cabinet stocked with bottled beer. It’s a big step up from the mythical Greasy Spoon but nothing like as sumptuous as Little Betty’s in York. Still, the service was friendly, the food was good and we’d have thoroughly enjoyed our light lunch … if it wasn’t for the background music.

For some inexplicable reason the proprietor (Miss B herself, perhaps?) had chosen to pipe a never-ending stream of tacky Max Bygraves songs through a small speaker attached to a plywood board and hung from the ceiling. Fortunately, the volume was low and, most of the time, we could shut it out of our conscious thoughts. But at every pause in the conversation we were rudely assailed by muzak of such mediocrity and blandness that it almost made me choke.

My mind wandered, Max Bygraves intruded briefly once again, and then I remembered the Fairport Convention song Crazy Man Michael. Why? I have no idea. Perhaps it had something to do with the mad and maddening choice of sounds to accompany our lunchtime fare. Or perhaps it was just my subconscious finding an escape from the subtle torture being inflicted upon us. Whatever the reason it was good to apply the soothing balm of crazy Michael to the stinging wounds inflicted by maddening Max.

Crazy Man Michael sounds for all the world like a traditional English folk song from centuries ago but, in fact, it was written by Richard Thompson and Dave Swarbrick in the early days of Fairport Convention, appearing on their Liege and Lief album released in 1969. It’s a song about those moments of madness we all have from time to time. The times when we think, “Oh, no! What have I done?”. When we, unthinkingly, destroy what is most precious to us. And know we must live with the consequences for the rest of our lives.

Yes, it’s a sad song, but beautifully performed. The acoustic and electric guitars of Richard Thompson and Simon Nicol provide a traditional folk framework, Ashley Hutchings’ bass dances below, Dave Swarbrick’s violin adds pathos, Dave Mattack’s drums push it all along and Sandy Denny’s mellow voice is gentle and soothing. As you listen the bitter ache of irretrievable loss and the joy of sweet music will mingle and seep into your soul. Hops and honey. A cure for all the world’s ills. At least for 4 minutes and 40 seconds or so.

One thought on “Crazy Man Michael”