Guillemots are a bit of a mystery. They are undoubtedly my favourite band of all time but it’s hard to say why. Let’s do some research, see what we can find out, and try to throw some light on the band and their music. 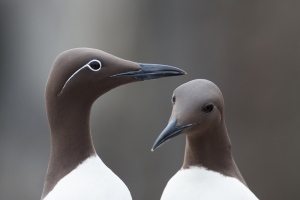 First of all, they are named after a seabird.

According to Wikipedia, Guillemots music has been influenced by ‘BIRDSONG first and foremost’. Certainly there are several other references to birds in Guillemots‘ recordings (redwings, flycatchers, doves) and there’s a YouTube video in which a delighted Fyfe Dangerfield brings our attention to the songs of a wren and a robin. Could that be the secret?

Fyfe is a classically trained pianist, guitarist and singer/songwriter. He formed Guillemots in 2004 along with Grieg Stewart (drums), Aristazabal Hawkes (acoustic and electric bass) and MC Lord Magrao (guitars, synthesisers and effects). There’s nothing particularly unusual about those instruments; that can’t be what makes the band so special.

Fyfe was born and brought up in England, Greig hails from Scotland, Aristazabal is Canadian and Magrao is from Brazil. You might think that brings different influences to the music but I can’t detect it. No, it’s not the cosmopolitan make-up of the band that explains their unique appeal.

Guillemots music has been described as “indie rock” (Wikipedia), “avant-garde pop and indie rock” (Last.FM) and “a cappella/pop/big beat” (Guillemots official Facebook page). The last of those is definitely different but, unfortunately, it’s also very misleading. There are no a cappella tracks on any of Guillemots four albums (although Blue Would Still Be Blue comes close) and I certainly wouldn’t call them a big beat band.

Stripped down to the bare essentials Guillemots tracks are just good pop songs. They’re fairly short, have a simple, conventional structure and feature melodies that you want to hum. You might have heard them all before, on the radio, in shops, while you travel; and they sit easy on the ear so you hardly notice your spirits lift a little when you hear them.

But there’s more than that to Guillemots songs. If you listen a bit more carefully you’ll find there’s a beat that pumps a little more blood through your veins and urges your steps to synchronise with the music. You might catch an unusual chord sequence here, an interesting bass line there, an unexpected change of rhythm, dulcet vocal harmonies, subtle special effects; a treasure trove of delights hidden in plain view.

There’s no screaming guitar, no complex rhythms, no brain-numbing thump, thump, thump of bass-and-drums. There’s nothing outlandish, weird, or off-the-wonderwall; no one thing that makes Guillemots stand out. It’s simply a dish of the finest ingredients, expertly blended, beautifully cooked and superbly presented. Not too little of this, not too much of that. Everything just deliciously right. That, I think, is the secret.

For my money the first is still the best. It’s the most varied, the most adventurous and, ultimately, the most successful. Three UK top 40 singles came from Through the Windowpane: Made Up Love Song #43 (a Crotchety Man track of the week in February), Trains to Brazil and the superb Annie Let’s Not Wait (best single of 2007 in my opinion). And there are at least two more tracks on the album that are just as strong (the title track and Sao Paulo). All in all, Windowpane is a truly brilliant album full of exuberant songs and epic productions.

By contrast, Red is a sweet and sour mix of plaintive melodies and abrasive, raw energy. The second album was never going to be as good as the first; that would have been impossible. But there are soothing songs, rocking riffs and echoes of the wide-screen, film-score music of the previous album. There is one track, though, that grates on me like squeaky chalk on a blackboard and that’s Get Over It, Guillemots best selling single. There’s no accounting for taste, I suppose. Especially that of the unwashed, single-buying masses!

Walk the River, is perhaps the most assured and the most indie of Guillemots albums. Most of the tracks roll gently along, carrying you away on the current of a lazy river. Sounds to comfort you as your mum pushes you through the park in your buggy with just the occasional jolt as a wheel bumps over a stone (like the exquisite bass part in I Don’t Feel Amazing Now.) Life doesn’t get any better than this.

Early in 2012, Fyfe announced that Guillemots were working on a project that would deliver four albums in a year. The first of those, Hello Land! was released in May 2012 along with an apology for being behind schedule. That album bears all the hallmarks of Guillemots compositions: lilting tunes, sumptuous synthesised strings, haunting vocals, a smorgasbord of sounds beautifully blended and artistically presented. A worthy successor to Walk the River.

Then, in 2013, Magrao announced that he was leaving Guillemots to concentrate on his own band, LUNGS. Later that year Fyfe posted a Facebook message assuring us that more Guillemots music was in the pipeline and, in June 2014, he announced a gig while he was visiting Arista in L.A. – just the two of them playing Guillemots, Arista and Fyfe tracks. Since then there’s been nothing.

Have we heard the last of Guillemots? I don’t know but, If we have, it’s been great while it lasted. Whatever the future holds Guillemots are worthy winners of my band of the year award for 2006.

If you’re not familiar with Guillemots’ repertoire you must have been asleep since 2006. Shame on you! Wake up now and start listening. No matter how sleepy you feel Annie, Let’s Not Wait will get you out of bed. Vermillion will rouse you. You can listen to Standing on the Last Star on the train, relax with Fleet in the evening. Let Guillemots accompany you throughout your day. And when you go to bed, Byebyeland will lull you to sleep. Sweet dreams, my child. Sweet Guillemot dreams …