The ghosts of October have melted into the first fog of the autumn and November has arrived in our village.

Last night the Crotchety Couple cowered inside while excited young voices passed by our house, rising to a crescendo and fading away again. Then, unexpectedly, there was a brisk rapping on the front door. Fear gripped my heart as I went to answer the knocking. Was I being summoned by a spirit of the night? Or, worse, was I about to be accosted by small children in Hallowe’en costumes demanding “trick or treat”? No, it was only our next-door neighbour asking for help with his computer.

Later, as the evening wore on and the likelihood of further visitations diminished, Crotchety Man’s inner tension eased. There were no further surprises overnight so, to celebrate coming through this ordeal practically unscathed this year, I think we should have a fanfare. I have never understood why some people like being scared but it seems to be a very common affliction. What better piece of music, then, than Aaron Copland’s Fanfare for the Common Man?

Aaron Copland was an American composer, music tutor and conductor. He studied all forms of classical music, was taught by eminent music teachers and mixed with a wide range of contemporary composers. His best-known compositions were in an accessible contemporary classical style although his work was also influenced by jazz and the more avant-garde composers of the time, such as Schoenberg.

During the first World War the conductor of the Cincinnati Symphony Orchestra, Eugene Goossens, had invited British composers to submit a fanfare to introduce each of the orchestra’s concerts in the coming season. The idea was so successful that he repeated it during the second World War, this time sending invitations to American composers. A total of eighteen fanfares were submitted, Aaron Copland’s being Fanfare for the Common Man.

The fanfare, as you would expect, is quite short – 3 minutes 16 seconds – and features just brass and percussion instruments: four horns, three trumpets, three trombones, a tuba; timpani, tam-tam and bass drum. It starts with the crash and rumble of gongs and kettle drums as if the town cryer is calling “Oyez! Oyez!”. Then the brass instruments blare out a triumphant message with a sonorous unison that fills the hall, carries through the windows and billows down the streets. Everyone in the neighbourhood hears the notes, understands the message.

The cryer moves on. As he repeats his words other voices join in creating rich harmonies. “Victories will be ours!”, he proclaims, and the message ripples out in ever increasing circles, fading away, leaving the populace uplifted and ready for the glory that is to come. It’s a stirring, patriotic piece; something to send off the troops as America enters the war.

Many years later, in 1977, Emerson, Lake and Palmer recorded their own version of Fanfare for the Common Man. It wasn’t the first of Copland’s works to be given the ELP treatment (they had a version of Hoedown on their 1972 album, Trilogy), nor was it the only ‘classical’ piece to feature on ELP albums (their Pictures at an Exhibition album was based on a work by Mussorgsky). It was a natural piece for ELP to perform.

The ELP version of Fanfare was a surprisingly faithful rendition of Copland’s orchestral piece. The score was transposed to a key in which Keith Emerson liked to improvise, the brass instruments were replaced by Emerson’s synthesiser (a Yamaha GX-1 according to Wikipedia) and Greg Lake’s bass guitar was added. Then an improvised passage was inserted some two-thirds of the way through, extending the track to over nine minutes long. The theme, though, was entirely Copland’s and that feeling of triumph (or was it triumphalism?) comes across as loudly and clearly as ever.

Crotchety Man likes both of the versions described here. (There are a number of other versions, too.) The original is, perhaps, a little short; the ELP version perhaps a little long. Either way, they are exciting, stirring pieces full of life and exuberance; a stimulant as effective as any pill and much safer. Just the thing for dreary autumn days. 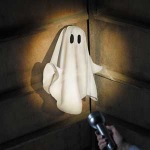 Oh, and one more thing… Aaron Copland died in 1990 at a place called Sleepy Hollow. Spooky or what?