Sophie was a confident young woman now looking for friendship, romance, love. She had come to this restaurant a few times before. It had an Alice In Wonderland theme, which appealed to her sense of fun and Sophie always felt comfortable here. Tonight, though, as she walked past the sign saying “private function” and made her way down the steps to the basement, she was a little nervous.

She had come alone. She would be meeting others here but they would all be strangers. Sophie had never been to a speed dating event before. As she reached the last few steps she could see about a dozen people, some announcing their arrival at the organiser’s desk, others sipping complimentary drinks or furtively scanning the room assessing prospective partners and rivals.

The participants had been carefully selected and vetted by the dating company. They were all graduates, they were all under 40 and there were no obvious weirdos that Sophie could see. A single girl would be safe enough here; the men might be wimps or crushing bores but they wouldn’t be aggressive. Sophie gave her name at the desk and waited for the session to start. 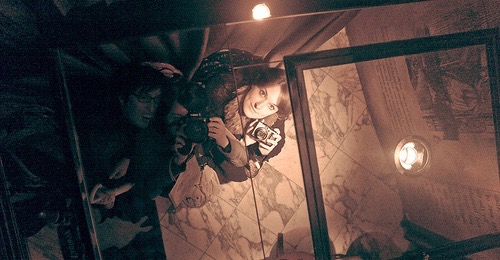 The first interview candidate reminded Sophie of Arnold Schwarzenegger – an impressive package of muscle and bone but not what you’d call handsome and with a hint of clumsiness in his movements. It turned out that his name was Jake and he was an athlete. He offered to let Sophie ask him questions first and she immediately put her pre-prepared plan into action.

“Imagine you are a city”, said Sophie. “It could be any city in the world: Paris, New York, Kuala Lumpur, whatever. Which one are you?”. It was a more interesting question than “Where are you from?”, it would show how her suitors would react to the unexpected and it might provide a deeper insight into the character of the guy across the table. It was the kind of question that might lead the conversation anywhere.

In her mind’s eye Sophie saw a modern city full of skyscrapers lit up at night proudly telling the world “I am here“. Jake was clearly no shrinking violet. Sophie raised an eyebrow and asked what else he might be.

I’m an army of wind turbines marching over your countryside.

Sophie imagined a battalion of Jakes in military fatigues tramping across England’s green hills, arms flailing an indecipherable semaphore message. She laughed helplessly at the thought. Jake was more puzzled than affronted and he accepted Sophie’s apology with an amused grin. The event was off to a promising start.

The lyrics of Tokyo from Athlete‘s 2007 album Beyond the Neighbourhood are quite obscure. My little story about Sophie and Jake is just the Crotchety Man interpretation; it is far from authoritative. We can take it a bit further, though. Let’s suppose Sophie and Jake did go out together for a while. For Sophie, Jake was good company and a passionate lover but in the end he wasn’t the one for her. Jake, on the other hand, was smitten with Sophie and he knows he will never forget their embraces.

Jake is remembering it all: that first meeting, his clumsy attempts to paint a picture of himself and the overwhelming emotion of falling in love.

An indie rock song provides the soundtrack to his thoughts. It has an urgent, pulsing beat forcing the memories to stream through his consciousness. Piano and synthesiser chords ebb and flow recalling the warmth of a fresh new friendship. A taut rhythm guitar echoes the thrill of a new romance and distorted lead guitar riffs scrape like sandpaper on sensitive skin as he remembers the pain of breaking up.

Tokyo is a fairly typical indie rock track, but a good one. Along with Hurricane from the same album it prompted Crotchety Man to buy the CD and it’s certainly worthy of my Track of the Week award.

Now, imagine you are a city. Which one are you?