When he was about seven Little Boy Crotchety had a part in the school play. Sitting cross-legged on the floor he used an enormous silver cardboard needle to stitch some invisible cloth, while the narrator introduced him as the tailor. I don’t remember what the plot was or even why it required a tailor. I might have had a couple of lines, then again I might not. It certainly wasn’t a taxing part and I wasn’t the least bit nervous in that scene. The butterflies in the tummy had come earlier when, along with one of the girls, I had to open the play with a tambourine flourish. Yes, folks, on that occasion I was the very embodiment of Bob Dylan’s tambourine man.

Not that I’d heard of Bob Dylan then, no-one had in 1959. And, anyway, like most radio listeners I fell in love with The Byrds‘ version in 1965 long before I knew who wrote the song and many years before I heard it sung by Dylan himself.

Roger McGuinn’s jangly guitar arpeggios announce Mr. Tambourine Man like a solo glockenspiel in an approaching marching band. “They’re coming, Ma, I can hear them!”, cries an excited voice from behind us in the waiting crowd. And, sure enough, here they come. Three guitarists, one with a twelve-string, all of them singing, then a bass player striding along and a drummer keeping time at the back. “Hey, mister tambourine man”, they plead, “play a song for me”.

This is strange. Why would they call for the runt of the instrument litter? A tambourine doesn’t ring like a guitar string or bellow like an organ. It doesn’t croon like a clarinet or trill like a flute. It can’t blare like a trumpet and harmonies are out of the question. Surely a tambourine is not a proper instrument, it’s just a device to get bored and tone-deaf students involved in a music lesson. Isn’t it? Or is the tambourine man such a brilliant musician that he can make his humble wooden hoop with its goatskin membrane and bright brass jingly zils sing with the wind and crash with the thunder?

The Byrds don’t explain, they just keep singing, their harmonious voices asking for another encore from their idol entertainer.

Take me for a trip upon your magic swirling ship.
All my senses have been stripped
And my hands can’t feel to grip
And my toes too numb to step
Wait only for my boot heels to be wandering.

They must have been up all night. Their biological batteries are completely drained. They no longer have the energy to stumble forward but the Duracell Bunny is still going strong, hitting and shaking that tambourine as if he has an inexhaustible source of power. 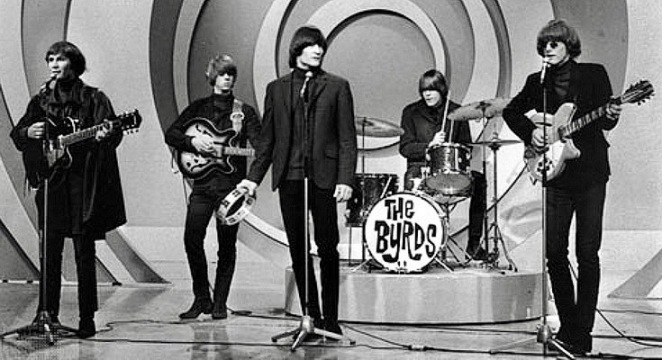 The Byrds‘ version of Mr. Tambourine Man was a number one hit on both sides of the Atlantic. It is regarded as the song that got the folk-rock genre started and it has been covered many times. Notable covers include those by: the late Glen Campbell (guitar instrumental), William Shatner (in one of his silly moods), Martin Simpson (a superb example of the folk guitarist’s art), Stevie Wonder, Melanie, Arlo Guthrie and Crowded House.

But to my mind the best of the rest is this pure folk one by Judy Collins. Her clear voice gives full expression to the words, the 12-string acoustic guitar harks back to the jingle-jangle of Roger McGuinn’s electric Rickenbacker and a double bass adds depth and warmth. (OK, the YouTube poster can’t spell ‘tambourine’ but let’s not get picky.)

Are any of the covers better than the Dylan original? Popular opinion puts The Byrds‘ version above that of the songwriter’s but in the end it’s all a matter of taste. In the sixties a one verse, 2 minute 29 second single got airplay, a five and a half minute album track did not. Nowadays we’d rather hear all four verses. Then again the electric guitars and the Bach-inspired arpeggios gave that first cover a new and exciting sound. It’s a close call, but the Crotchety vote goes with the majority on this one.

My final word on the tambourine man goes to a YouTube video with over 12 million views. At first glance it’s a 2013 recording of Mr. Tambourine Man by Dylan himself and it’s very good. Irritatingly, though, it’s another cover credited to Helio Sequence, “an American indie rock duo from Oregon”, but that information is hidden away in the fine print. Still, it sounds very much like the single Bob Dylan might have produced back in 1965. And 12 million hits ain’t bad!

Bruce Langhorne, pictured at the top of this post, was a folk and session guitarist as well as a tambourine player. It is his electric guitar that we hear on Bob Dylan’s recording of Tambourine Man from the album Bringing It All Back Home. He died in April 2017.