The House on the Hill

The English master was about to hand back our homework. “Before I return your books”, he said, “I’d like to read you one of the essays”. We sat there nervously for a moment, not knowing what to expect. Was he about to praise the text he held in his hands or lambast it mercilessly? And whose work had he singled out for special attention?

As soon as the master began to read I knew I was off the hook. The piece had a title, something like “The House on the Hill”, and mine was gloriously untitled. So, with considerable relief, I listened, intent on understanding why this ordinary piece of homework was getting such exceptional treatment.

From the title I had expected the essay to be a descriptive piece but it turned out to be a short story. It was written in the first person and told of a boy who wanted to explore a ramshackle old house. For the sake of this blog post I’ll call him Joe.

The house had been empty for years and there was an element of mystery about it that fascinated Joe. He knew his parents would forbid him to go. He knew, too, that there were perfectly good reasons not to go sniffing around – the structure might be unsafe and he might be arrested for trespass. But the dark windows beckoned him and the more he tried to put it out of his mind the larger it loomed in his thoughts.

So, one day, Joe gathered his courage and walked up the drive to the house. All was quiet. The house looked unoccupied. As he stood there on the porch Joe got the feeling that something wasn’t quite right. Perhaps he should go home. But, if he chickened out now his curiosity would never be satisfied. Joe tentatively pushed the door and it swung open easily as if the house was welcoming him in.

Stepping into the hall Joe saw nothing unusual, just a traditional entrance with a big oak staircase and some wooden panelling. An open door led to the living room. With its patterned wallpaper and faded carpets this struck Joe as a bit old fashioned, but there was something else, too. The feeling that something wasn’t right was stronger here. Something was out of place, he was sure, but what was it?

Going from room to room Joe searched for something that didn’t belong here. It wasn’t the furniture or the ornaments, they were as much at home as the walls and the floors. But the house was blighted by something. Something out of place or something out of time. Joe had to find it. Then, upstairs in a bedroom, Joe suddenly realised what it was. It was him!

The story ended, I think, with Joe running home, never to return to the house on the hill – not because he was scared, simply because he didn’t belong there. When I heard that story I was, like my English teacher, immensely impressed. The writer would have been 12 or 13 at the time and his story was so well written that it could have been published alongside established authors. That was why it had been singled out to be read to the class. 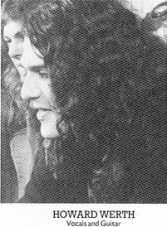 Some six or seven years later a band called Audience wrote a song with a similar theme; The House on the Hill was the title track of their 1971 album. As far as I know there’s no connection between the schoolboy’s story and the Audience song but the band did play at our school dance around the time the album was being recorded. (Caveat: I didn’t go to the dance and I only have my feeble and unreliable memory to rely on for that curious fact.)

Audience were an unusual band. With Keith Gemmell on tenor sax, clarinet and flute as the lead instrument and Howard Werth’s nasal, warbling vocals their sound comes very close to Jethro Tull at times. And yet, at other times their material strays too far from Tull territory to categorise them as progressive rock. So much so that one review of the band’s eponymous first album describes three of the tracks as “pure twee twaddle”. The consensus seems to be that we should file Audience under ‘art rock’, but there are definite folk and prog rock influences, too.

Here’s The House on the Hill on YouTube. I find it peculiarly unsatisfying visually but it’s a good example of the band’s arty, proggy music.

3 thoughts on “The House on the Hill”