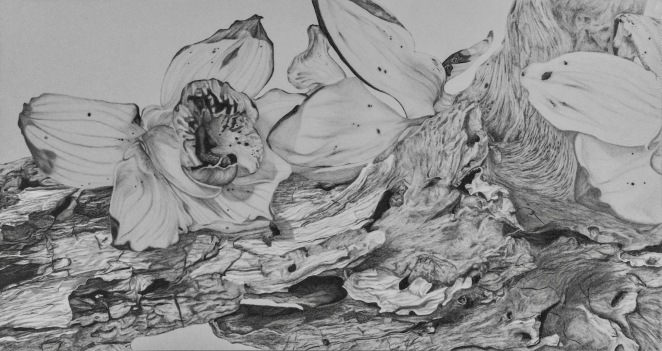 Innocence 2 – a chalk and charcoal drawing by Justin Lim

Here in the UK when we want to emphasise that two things are very different we might say, “They are like chalk and cheese”. It’s a snappy phrase but are chalk and cheese really so different? Wouldn’t “chalk and coal” turn up the contrast in our mental imagery more effectively? Perhaps that’s what they say in Russia, although “как мел и уголь” (literally “like chalk and coal”) doesn’t exactly roll off the tongue, either. Even so, that’s the only interpretation I can offer for the title of this Track of the Week.

Chalk and Coal is a song from the Lighthouse album by the Russian duo, iamthemorning. Their music is usually described as progressive rock and chamber pop but, to my mind, neither of those labels really captures the essence of their work. The Head of Classifications at Crotchety Mansions prefers to tag them as ‘orchestral beats’ or ‘classical crossover’.

At its core iamthemorning is the pianist, Gleb Kolyadin, and singer, Marjana Semkina. In performance they add guest musicians to create the modern equivalent of a chamber orchestra. On Lighthouse there are individual credits for: guitar, bass and drums; harp and bodhran/percussion; flute, clarinet, trumpet and bombard; violin and cello. A string ensemble of five violins, two violas, two cellos and a double bass is also listed in the sleeve notes. If you think of them as a rock group plus small orchestra you’ll get the idea.

The rock musicians on Lighthouse include the considerable talents of Colin Edwin (Porcupine Tree) and Gavin Harrison (Porcupine Tree and now King Crimson). Marius Duda (Riverside) also appears as a guest vocalist on one track. All three of them have appeared in these pages before and they give iamthemorning solid progressive rock credentials. In contrast to the heavy prog rock chalk, the orchestral instruments provide a lighter, smoother cheese accompaniment. In Chalk and Coal a trumpet blares a bleak melody while the piano pummels a disturbed mind embroiled in the misery of mental illness.

Between 2012 and 2018 iamthemorning released four studio albums, one live album, an EP and a short film on DVD. All of those recordings contain some very tasty fare. But, if you find you have a craving for Chalk and Coal, I would surmise you are unusually adventurous … and pregnant.