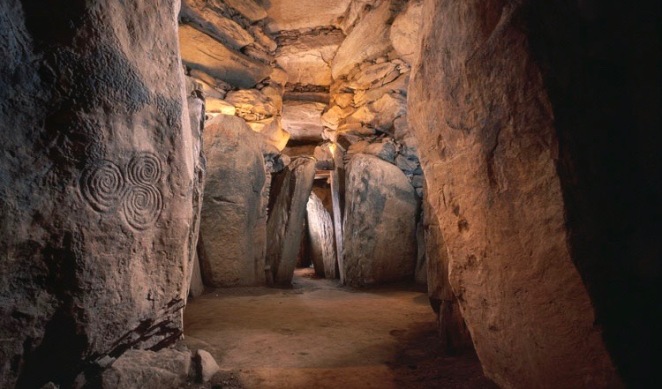 Today we have something old and something new. This track-of-the-week is called Newgrange, but that’s a highly anachronistic name for an ancient Neolithic monument. The song is Clannad‘s response to the large burial mound with that name in County Meath, Ireland. Dating from around 3200 BC it is older than both the stone circle at Stonehenge and the pyramids of Egypt.

As with all ancient archeological sites little is known for certain about the people who built Newgrange or its original purpose. This gives the site an air of myth and mystery that is reflected in the slow pulse and haunting textures of the Clannad song. Underneath a layer of strummed acoustic guitar and keyboard wash a primitive drum beats long and low. Rising clear above them solid hardwood sticks click-clack, a wooden flute whistles a wordless song and three voices chant in a long-lost language. It’s hard to imagine a piece of music more apt.

By the usual standards of the music business Clannad is an ancient band. They have been performing and recording for very nearly 50 years. Just two weeks ago, though, a new release appeared on Spotify. The song is called Hourglass and it seems to be promoting Clannad‘s farewell concert tour and 50th anniversary next year. The Crotchety Couple grabbed tickets for the Nottingham date. They’re selling fast.

According to a comment on YouTube, Hourglass is a remastered B-side to The Theme from Harry’s Game. I expect it will be on the recently announced compilation, In a Lifetime Anthology, which is due for release on 13th March to coincide with the tour. That particular track doesn’t stand out from the slew of new age music that blossomed in the 80s but Newgrange is a superb example of that genre. It sounds as old as whale song and as fresh as morning dew; it is a hymn to cultures ancient and modern, no less relevant today as it was when it was first recorded in 1983.