The winter solstice occurred this morning at 04:19 am, UK time. For those of us in the northern hemisphere this is the time when the sun stops sinking lower in the sky each day and begins its upward journey in the yearly cycle of the seasons. It marks the end of shorter days and the beginning of longer, brighter daylight hours. I can think of no better reason to  celebrate and no more apposite music to accompany it than Paul Winter’s Sunwheel.

Paul Winter is an American saxophonist, composer and bandleader known for his mix of jazz, classical and world music genres. He also has a passion for the natural world that inspired him to incorporate the sounds of wolves, eagles and whales into some of his recordings. As Wikipedia eloquently puts it,

… his genre of “earth music,” … interweaves the voices of the greater symphony of the wild with instrumental voices from classical, jazz and world music traditions.

Winter has won several awards for his work as an environmental activist and no less than seven Grammys. His first band, The Paul Winter Sextet, won the U.S. Intercollegiate Jazz Festival in 1961 and the following year performed the first ever jazz concert in the White House at the invitation of the First Lady, Jackie Kennedy.

In 1967 Winter formed the Paul Winter Consort to explore a wider repertoire of musical styles. The Consort recorded twelve albums for major labels in the ’60s and ’70s, including one called Common Ground that featured the sounds of whales, wolves and eagles. (The Crotchety Research Department has not yet tracked down that one, so I can offer no opinion on its merits.)

Sunwheel is a track from the Icarus album by the Paul Winter Consort. Released in 1972, the album as a whole reminds me of Neil Ardley’s Kaleidoscope of Rainbows. Both are albums of composed jazz with strong classical and world music influences. To the Crotchety ear it’s a marriage made in a bright sunlit heaven. 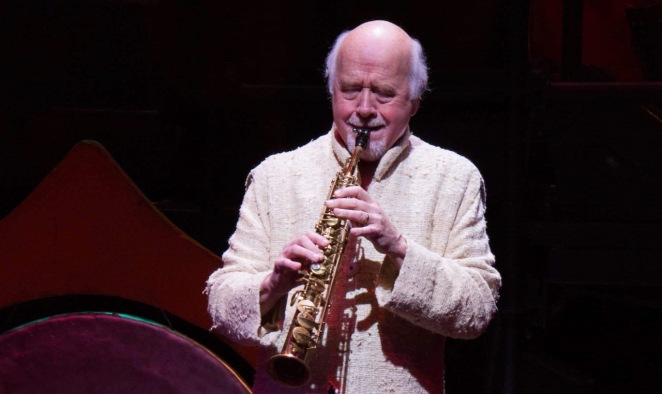 Paul Winter is 80 now but he is still writing and performing. The latest in his series of spectacular, “earth-embracing” Solstice Celebrations took place in the world’s largest cathedral, St. John the Divine, New York, over the three days leading up to this year’s winter solstice.

Of all the places I’ve played in the world, only two could host an event on this scale: the Cathedral and the Grand Canyon.