In 2007 Josh Dick and Brad Scoville used computers to create a music album for their U.S. college project. They called themselves Free Admission, the album was called Revenge of the Lawn Gnome and the result is available for free streaming and download on Jamendo, Last FM, Soundcloud and the Josh Dick website. 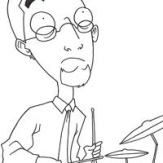 There are no ‘real’ instruments here; it’s all synthesised and computer-generated. But what you hear is traditional piano, guitar, bass, drums, strings and horns. Yes, there are electronic sounds but no more than on any pop song nowadays. The compositions don’t fit into any genre I can name. It’s a blend of classical, pop, jazz and other styles; the sort of thing a music student would have to write at college. All in all, it would make an excellent film score.

Free Admission have weak connections with Axis (free music from a band you’ve not heard of), Landscape (conventional tunes using unusual instruments) and Guillemots (film score music). Those connections alone would justify making Revenge of the Lawn Gnome my Album of the Month for July but no excuses are needed. The album is a joy to listen to; another Hidden Gem.

Here’s a track called Incognito Redux, a 2012 version of Incognito from the 2007 release.

One thought on “The Gnome’s Revenge”