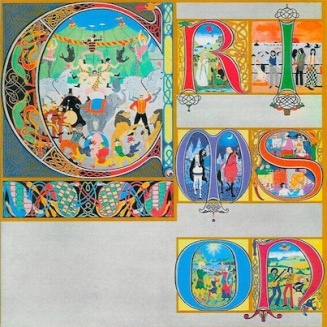 It’s a brave man that disagrees with the renowned guitarist, composer and producer Bob Fripp but, when it comes to King Crimson’s third album, Crotchety Man takes issue with him. In the early seventies Lizard graced my turntable as much as any other record I possessed; it could almost be described as the soundtrack to my university days. I must have listened to it for many, many, hours. So, when Fripp described it as “unlistenable” in 1999 I think he was mistaken. If anyone else had said that I might have assumed it was just a deliberately controversial comment intended to promote the then forthcoming 30th Anniversary release on CD. But the man who co-founded the Discipline Global Mobile label “to be a model of ethical business in an industry founded on exploitation, oiled by deceit, riven with theft and fueled by greed” wouldn’t do that.

Lizard is certainly the jazziest of King Crimson’s albums. All the material was written by Bob Fripp and Pete Sinfield during a band “interregnum” when King Crimson had no other permanent members. The album was recorded after hastily recruiting Mel Collins (saxophone, flute), Andy McCulloch (drums) and Gordon Haskell (bass) into the band and drafting in guest jazz musicians Keith Tippet (piano), Mark Charig (cornet), Nick Evans (trombone) and Robin Miller (oboe, cor anglais). Jon Anderson of Yes also supplied vocals on the title track.

The first side of the original 1970 vinyl release contained four songs; side two was a single 23 minute track in four sections.

The album opens with Cirkus, an intriguing mix of guitar, mellotron, saxophone, drums, bass and vocals that can best be described as progressive rock with strong jazz and classical influences. There are echoes of the stadium-filling grandeur of earlier tracks such as In The Court of the Crimson King, but it’s a lighter, shorter piece – a song rather than a movement from a symphony.

The next track, Indoor Games is similar: a relatively short, predominantly guitar, Mellotron and synthesiser tune with a curiously light-hearted feel and some obtuse and lurid lyrics.

Happy Family adds Keith Tippet’s piano and the horn section to give a frosting of jazzy sparkle. It would be easy to dismiss this as frothy bling but if you let your ears unpick the multi-layered fabric of woven chords and melody you will find a carefully constructed work of art. You can also have fun decoding the lyrics which make unflattering comments about the Beatles.

Side one ends with the gentle ballad, Lady of the Dancing Water. Unusually for music on the periphery of rock it features the sounds of flute and trombone over acoustic guitar and electric piano. The trombone is as warm as the summer sun, the guitar tinkles softly like distant rapids and the flute flits with the butterflies across the fields. It’s a wistful memory of a beautiful day by a brook with the singer’s lady love.

On the second side of the LP the title track is divided into three main sections and a short coda. The first part is called Prince Rupert Awakes and it’s a tuneful song that benefits hugely from Jon Anderson’s clear, mellow voice. It sounds at first like a piece of classical piano music. But the piano is accompanied by a guitar, and a Mellotron duets with the vocalist. There are interjections of discordant electronic effects, too, creating a kind of musical chiaroscuro. This has to be one of my all-time favourite passages by King Crimson – or anyone else.

Once Prince Rupert is awake we hear Bolero – The Peacock’s Tale. The drums tap out the bolero rhythm steadily through the whole six minutes of this second section while the cornet begins to sing a story with no words. After a while the cor anglais takes up the tale and soon other voices join in: saxophones, trombone, piano and bass. What started as a simple melody has morphed into a 7-part jazz instrumental without ever losing the initial theme. Then, in amongst the other instruments, the piano goes off on an astonishing flight of fancy – the ivories ripple and tinkle, ascending like a pair of squabbling birds, up and up, octave after octave as if each hand is racing to be the first to leap off the top of the keyboard. The other instruments raise their voices, too. Then, suddenly, the piano notes stop just as the rest of the band resolve their own crescendo. Order restored, the instruments take it in turns to complete the story.

The third section of Lizard, The Battle of Glass Tears, is (I think) the least successful part of the album. It is divided into three sub-sections: Dawn Song, Last Skirmish and Prince Rupert’s Lament. These represent the periods before, during and after the battle. Dawn Song tells of the tension in the opposing armies as they prepare for the coming conflict. It works as an introduction to the battle itself but wouldn’t be strong enough to be a track in its own right. Last Skirmish is (as you’d expect) loud, raucous and chaotic. It certainly sounds like a battle but who wants to hear the wailing and gnashing of teeth that comes with war? After the skirmish there is, predictably, a period of sadness and reflection as we listen to Prince Rupert’s Lament, in which Bob Fripp’s guitar moans and whimpers over the trudging drumbeat of an army in retreat.

Finally, and incongruously, the coda brings us the theme of the Big Top, as if to herald the entrance of the clowns. It fades in, rises in pitch as if the DJ has fiddled with the speed control, staggers along drunkenly for a while and fades away. The whole thing lasts less than 1 minute 20 seconds. Is this meant to signify that soldiers are as laughable as circus clowns? Does it simply remind us that the first track on the album is called Cirkus? Or is it there just to pad out the LP? I suspect it’s just a bit of fun.

Overall Lizard is still one of my favourite albums. It has stood the test of time. The battle parts may be raw and uncompromising but the rest is a sublime blend of prog rock and jazz styles. My only caveat is that Gordon Haskell’s voice never quite seems to fit in. I’d have loved to have heard Greg Lake or Jon Anderson on vocals but that wasn’t to be.

I have the 30th Anniversary CD release which was remastered in 1999 and released, according to Wikipedia, in 2001. There’s also a 2009 40th Anniversary release (remastered by Steven Wilson with Bob Fripp’s blessing). Now, by my reckoning 30 years on from 1970 is 2000 and 40 years on is 2010 so those ‘anniversary’ releases may be mis-timed but albums that last that long must have something going for them. I think Bruce Eder (of AllMusic) deserves the final assessment. He described Lizard as “an acquired taste”. I acquired the taste in the early seventies and it’s my flavour of the month again in January 2016.

Apologies for the YouTube link above. Unfortunately Lizard is not available on Spotify, etc.