It’s funny, sometimes, how one thing leads to another.

When I was a boy my dad became interested in photography. He had a Pentax single lens reflex camera that took 35mm film. There were no digital cameras then, of course. He would put a blackout curtain over the kitchen window to create a makeshift darkroom where he would develop and print his own black and white photographs.

It was a mysterious process. First, he placed the camera and a cylindrical black plastic canister called the developing tank into a thick black cloth bag. Inserting his hands through specially provided light-proof arm holes he performed some complex manipulation. At this stage he would sometimes mutter strange incantations like “Oops!”, “Damn!” or “Blast!”. Then, like a magician, he would remove his hands, open the bag and reveal an empty camera. The film had disappeared into the developing tank. It was magic!

But the trick was only just beginning. Next, the magician would pour a powerful potion called ‘developer’ into the developing tank, seal it and gently tip and turn it for exactly three minutes¹. Then the developer was tipped out and a ‘stopper’ solution poured in. Tip and turn a while. Replace the stopper solution with ‘fixer’. Tip and turn a while. And finally, wash thoroughly with water and hang up the strip of negatives to dry.

Once dry the negatives had to be printed. The strip of film was placed in an ‘enlarger’ which shone a strong white light down through a negative onto a sheet of photographic paper underneath. The enlarger was adjusted to illuminate an area about the size of a postcard, the photo-sensitive paper put in place and the lamp switched on for some 20 – 30 seconds or so. (The timing at this stage was usually done by guesswork but further attempts could be made if the first was either much too dark or much too light.) Then the exposed paper went through a four-stage process that mirrors that of the film: developer, stopper, fixer and washes. Take it from me, there’s something mesmerising about watching a picture slowly appear on a sheet of plain white paper. 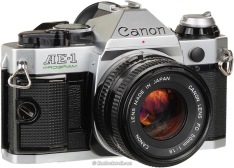 Much later, when I was a grown up holiday snapper, I became frustrated with the small size and poor quality of the photos I was taking with my cheap point-and-shoot camera. So, in the Spring of 1980, on the strength of unanimous positive reviews in the photography magazines, I bought my first 35mm SLR camera, a Canon AE-1. I know it was 1980 because the lens cap proudly announced that it was the official camera of the 1980 Moscow Olympics.

That camera gave me sterling service for more than 25 years but eventually, as digital cameras became popular, 35mm film became increasingly difficult to find². It was 2006 and time to enter the digital age. Sticking with the Canon brand I bought an EOS 350D, a model that was on offer because, as I soon discovered, it was about to be superseded. I think the old AE-1 is still in the loft and fully functional although the battery cover is cracked and the case is disintegrating.

The EOS 350D is also in perfect working order as far as I can tell. However, over the last six months there have been two cases of shots that are pure white and I was beginning to suspect that the memory card was failing. If you mention the Canon EOS 350D to a sales assistant in a camera shop these days they will go all misty eyed and start reminiscing about the great pioneers of the photographic age. Canon stopped producing that model more than a decade ago; to them it’s practically an antique. More importantly, though, it uses Compact Flash memory cards, a form that is still available online but no longer stocked by most camera retailers.

Was it worth getting a new CF card, I wondered, or should I move with the times and swap the 350D for a more up to date model? It’s silly, I know, but I felt I was being left behind by technology, an also-ran in the race to be faster, stronger, better. Anyway, the village show is coming up soon and I want to enter a really good picture in the photography category this time. (The judges were unimpressed last year.) The signs were auspicious; the time seemed right. So I am now the proud owner of a Canon 100D, entry level but bang up to date, 18 megapixel camera.

For the want of a memory card £363 was lost from the bank balance. But that’s progress, right?

As this is a music blog I suppose there ought to be something here about sound as well as vision. A quick search through Crotchety Man’s digital music collection threw up two tracks fitting the theme of photography. One was Nickelback’s Photograph and the other was Stereophonics’ Local Boy In The Photograph. I’ve chosen the latter as my Track of the Week.

Stereophonics is one of those bands that seem to make strong records without ever quite ringing the bell on the fairground strength-o-meter. On the Crotchety Man rating they reach the line marked “compilation album essential, further albums unnecessary”. Note the word ‘essential’; there are several songs on their 2008 Decade In The Sun compilation album that I wouldn’t be without.

Local Boy counts as essential. It’s a typical Stereophonics rock track with a good tune but it stands out because of the story behind it. The band’s singer and lead guitarist, Kelly Jones, saw a newspaper story about Paul David Boggis, a lad he once played football with. The article reported that Boggis’ died after being struck by a train and Kelly wrote the song in response to this tragedy.

He’ll always be twenty three
Yet the train runs on and on
Past the place they found his clothing.

There’s both sadness and a realisation that life must and does go on. Although we have no hard evidence it seems likely that Boggis’ death was suicide, which adds to the sense of loss for those who knew him and touches everyone who reads the story. When one thing leads to another sometimes a little good comes from the bad. In this case, an untimely death inspired a really good song.