I first heard Sally Barker some time around 1990 when she was touring in support of her second album, This Rhythm Is Mine. Guest musicians on that album included Mary MacMaster¹ and Patsy Seddon, harpists from Scotland, who subsequently joined Sally and accordionist Karen Tweed to form the all-woman folk band The Poozies. If my memory serves me correctly the concert I attended at the Phoenix Arts Centre, Leicester, UK was billed as Sally Barker but all four of The Poozies were on stage.

I particularly remember that evening for a story told by Karen Tweed. The band had arranged to rehearse at Sally’s house out in the Leicestershire countryside, a place that Karen had never visited before. When she arrived Karen found a rambling house at the end of a long drive and surrounded by a large garden with lots of trees and bushes. She knew from the directions she had been given that this was the right place but, at first, it seemed deserted. Karen had to ring three times before anyone came to the door.

When the door opened a stranger stood there with an expression on her face that seemed to say “whoever you are, don’t bother me now”. Karen hesitantly explained who she was and why she was there and the woman at the door ushered her inside saying curtly, “Go and wait in the kitchen, we’re a bit busy right now”. Karen followed the pointing finger down the corridor and as she did so she noticed a flustered figure scurrying through the house. Some furtive words were exchanged in the next room but all Karen could make out was “we may have to call the police”.

Karen found the kitchen and waited. From time to time far off voices could be heard from the garden. They were calling out to each other and sounded worried. They were looking for something, something important or precious. No-one came to the kitchen. Karen could sense that some emergency had happened and might take some time to resolve. In the meantime she thought it best to stay out of the way and decided to make herself a cup of tea.

As Karen started to search for mugs and tea she thought she heard a scratching noise from one of the floor-level cupboards. The building was probably an old farmhouse and she imagined the kitchen might be home to mice or even rats. Nervously, Karen opened the cupboard and a little girl’s face peered up at her. “Hello”, said Karen, “what are you doing in there?”. But the girl said nothing. Karen explained that she plays the accordion and she had come for a rehearsal. “Shhsh”, whispered the girl, “they’ll hear us”. 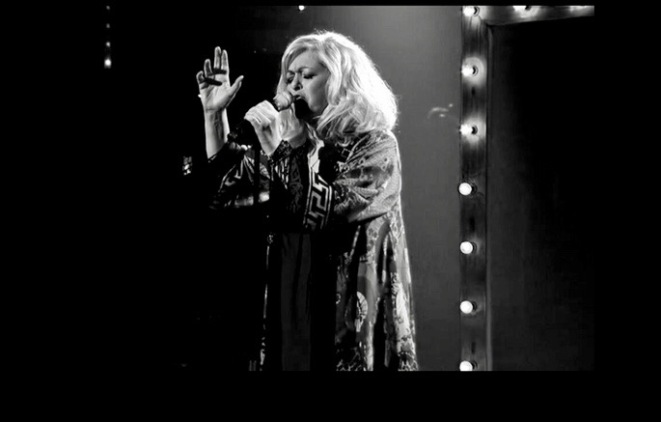 It was an enjoyable concert. Sally Barker writes unusually original songs and she has a warm, distinctive, soulful voice. The other musicians were faultless – I was particularly impressed with Karen Tweed’s accordion playing. So, yes, readers, I bought the CD. Although I didn’t know it at the time guests on This Rhythm Is Mine include some of the most respected musicians on the folk circuit: Dave Mattacks, Dave Pegg and Danny Thompson to name but three. If that’s not a recommendation I don’t know what is.

From 1995 to 2006 Sally Barker put the music business on hold while she had two children and then cared for her husband who became ill with cancer and died in 2003. In 2007 Sally rejoined The Poozies and in 2013 she relaunched her solo career. The following year she became a contestant on the BBC talent show, The Voice, in which she finished in joint second place. As a result, according to her website, “Sally’s album ‘Another Train’ featured in the official indie charts and ‘ebayers’ were asking in excess of £100 for 2nd hand Barker LPs and CDs!”. That’s quite a comeback.

Sally Barker’s latest album, Ghost Girl, was released earlier this year but it’s not on Spotify² so I’ve chosen her Love Rat EP from 2015 as my Album of the Month. Here’s a live version of the title track. Listen to the words.

Did a chill run up your spine at the one minute mark? No? Then perhaps you’d prefer the studio version with drums, bass, organ and slide guitar supporting Sally’s vocals. (The link above is to the full band recording on Spotify.)

In addition to the title track the EP contains three original songs (Jealous Bones, Kissing a Stranger, Heart & the Shell) and two covers (Walk On By, Don’t Let Me Be Misunderstood). The covers are done in typical Sally Barker style; either you like them or you don’t. For me, nobody beats the original Dionne Warwick version of Walk On By, but Sally Barker’s take is pretty good, too. I do like Heart & the Shell, though. It’s one of those songs that has all the wrong characteristics for my taste: a folksy waltz, country-tinged slide guitar, not much of a tune. And yet, Sally Barker’s voice burrows under the skin and the poetry of the words sinks deep.

On the whole Sally Barker is an acquired taste. She’s no rocker and her mix of folk with a little bit of country and a soupçon of jazz will never appeal to everyone. She has a really good voice, though, and I’ll leave you with another live video that I think illustrates her talent. Anyone who can do justice to a song made famous by Sandy Denny must have something to blog about.