The end of a year is a time to look back. It’s a time to celebrate our achievements and try to learn from our past mistakes. But as one year ends another begins and that’s a time to look forward. We set ourselves new goals and try to imagine what the future will be like. Whichever way we look, forward or back, the mists of time obscure our sight and erode the details of our vision. The farther we look the less we see and beyond the mists lies only mystery.

Perhaps that is why this track-of-the-week is called Into the Myst.

This song is taken from an album titled Moon Cabin by a band called Goose. The Crotchety catalogue puts them under the Indie Rock heading; bandcamp offers alternative, funk, fusion, jam, psychedelic, folk and rock (in that order) but that’s completely misleading. Nothing on Moon Cabin, their only album, or any of their more recent singles suggests anything other than straightforward easy rock to me.

I first saw Goose two summers ago at a beach club in Connecticut. … Their sound was fresh and melodic and Rick’s voice was subtle and soothing and catchy and wonderful. I was hooked immediately.

There’s little or no information about Goose on the ‘Net. From their bandcamp page and YouTube listings we can ascertain that they were originally from Connecticut and infer that they are known more as a live band than recording artists. Discogs lists just the one album and provides neither biography nor photo. Even the band’s website may be unreliable; the About page says their bass player is Trevor Bass whereas the other sources credit Trevor Weeks. Perhaps the fog of the Internet has conjured up a lexical mirage.

The band is built around the song writing talents of Rick Mitarotonda, who studied jazz guitar and composition at Berklee College of Music, graduating in 2016. The other members of the band are: Peter Anspach (keyboards, guitar, vocals), the aforementioned Trevor Weeks (bass) and Ben Atkind (drums). All are highly competent musicians and their music makes for particularly pleasant listening. If there is anything lacking it is that there are no surprises – no off-kilter rhythms, no startling dissonances, no blistering guitar runs, nothing to evoke a “Wow!” response. 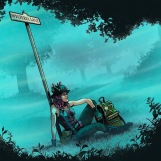 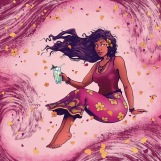 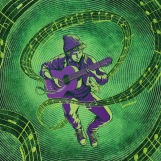 My crystal ball is very hazy. If I peer hard into the misty globe, I think I can see a long career in the music business for Mr. Mitarotonda. But his Goose never soars especially high and the grey bird remains little noticed beyond its homelands.