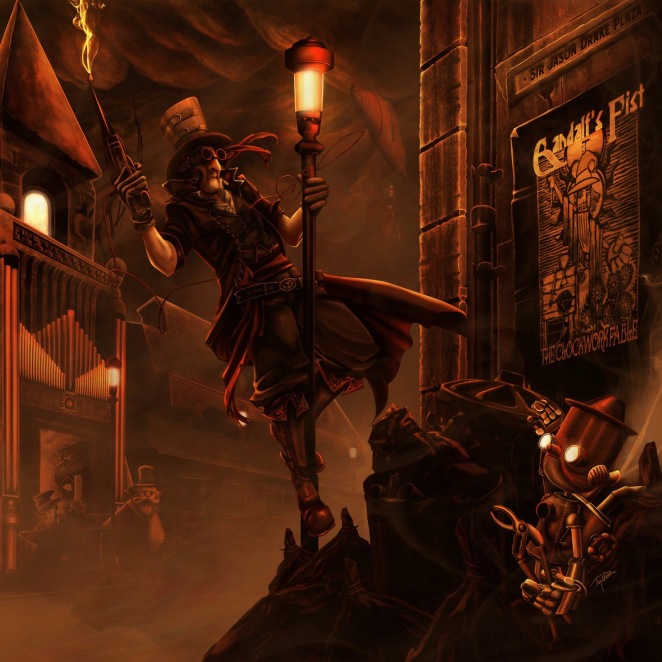 I love a good story. And The Clockwork Fable is a splendid story. It concerns the subterranean city of Cogtopolis, founded 200 years or more ago. There is no natural light there. The citizens have legends of a sun that once shone above the surface but its rays were extinguished by clouds of choking, burning dust. All the life that depended on the sunlight died and the people took refuge below ground.

To survive in their man-made caverns they built clockwork machinery. In the four cog cycles of the ‘morning’ the Great Cog turns, powering fans and filters that purify air from the poisonous atmosphere above; in the 4-cycle ‘afternoon’, manual workers haul on chains to rewind the great spring. The evenings are spent under curfew while essential maintenance is carried out on the vital mechanisms.

Plasma lamps provide the only light in Cogtopolis. The street lamps are lit by lamplighters entrusted with a supply of the Eternal Flame. It’s said that you can tell the age of a lamplighter by the brightness of his flame; his light is only extinguished when the ‘Lighter’ dies.

The main source of power in Cogtopolis is steam. There are steam-driven walkways and jetpacks; smaller devices work on a combination of clockwork and steam. The Primarch, the absolute ruler of Cogtopolis, even has a steam-powered zeppelin which flies high above the city from where he can keep an eye on his people.

Cogtopolis was built in the hope that its inhabitants would, one day, be able to return to the life they had enjoyed before the devastation and destruction on the surface forced them underground. A semi-religious organisation called The Wardens of the Light was formed to keep that hope alive and prepare for the day they could emerge from their self-imposed incarceration. They built The Aperture, a large door to the surface with a lens at its centre that would allow light to flood into the city when the sunlight returned.

But, as the years went by, the people began to lose faith in the Wardens. The doubters formed The Nightkeepers who believed it was the sun itself that caused the catastrophic desolation of the old world and darkness was the only way to survive. Eventually, the Nightkeepers’ doctrine came to dominate Cogtopolis and The Wardens of the Light were regarded as an obsolete and subversive cult, persecuted for their beliefs.

And so, the Nightkeepers searched for the Alpha and Omega cogs, torturing anyone suspected of being one of The Wardens of the Light.

The Clockwork Fable paints a vivid picture of Cogtopolis and tells the story over a 3-CD, 3 hour 14 minute epic album. Woven between the music tracks is an audio play with narratives by professional actors (Mark Benton’s irreverent voice is instantly recognisable). The whole is a spectacular piece of aural art – a rock opera to rival A Lamb Lies Down On Broadway or Heterotopia.

The Clockwork Fable is the sixth studio album by Gandalf’s Fist. The band was formed in 2005 as a collaboration between multi-instrumentalist Dean Marsh and lyricist-vocalist Luke Severn. Since then they have added Stefan Hepe (drums), Christopher Ewen (bass), Keri Farish (vocals) and Ben Bell (keyboards).

Neither the band nor any of the musicians were known to Crotchety Man until they were spotted in the Burning Shed store about two weeks ago. And the research elves haven’t come up with much information, either. There’s a WikiPedia page that relies heavily on the band’s website biography but there’s not much else to go on.

In contrast to the sketchy details of the band members there’s quite a bit of information on the Fist‘s website about the characters that inhabit the caverns and tunnels of Cogtopolis.

First we meet The Lamplighter as he tramps the streets recharging the plasma lamps. Soon we are introduced to The Tinker, the Great Cog‘s maintenance engineer, and his two assistants, orphaned Eve and a clockwork Boy. We meet the haughty Primarch and his spiritual ally, Pastor Simon, who together command the Nightkeepers‘ forces of oppression. And, finally, two lesser characters make an appearance: The Steam Ranger who used to jetpack across Cogtopolis carrying messages for the Primarch and the Pastor until he realised their corruption and brutality; and Armistead, an old lamplighter turned hermit who watches from a cabin perched high above Cogtoplois like an aerie.

As an album The Clockwork Fable is epic; as a story it is fabulous. And I just love a good story.