Gentle Giant was a big band.

When I say ‘big band’ I don’t mean they sound like the popular 50’s dance bands led by the likes of Ted Heath, Billy Cotton or Glen Miller. Gentle Giant‘s music is very different. It sits under the umbrella of progressive rock, but it incorporates elements from a wide range of other genres, too: mediaeval, classical, folk, hard rock and jazz all feature in their compositions.

The Giant was big even before he was born. The Shulman brothers, Phil, Derek and Ray, had formed the soul/pop group Simon Dupree and the Big Sound in 1966. This band had a hit with the faintly psychedelic pop song Kites in 1967, but the Shulmans wanted to go in another direction. Ignoring their record company’s wishes for more pop songs, in 1969 they disbanded Simon Dupree.

Gentle Giant‘s first album, Gentle Giant, was released on vinyl in 1970. It was packaged in a striking gatefold sleeve. The artwork on the front cover depicted an enormous head with a high brow, big friendly eyes and a wide grin – the head of the Gentle Giant himself. Opening the gatefold revealed the giant’s body below, shrunk by perspective, his feet just fitting onto the back of the sleeve. Of all the LP covers I’ve seen this, perhaps, was the one with the biggest impact.

The music on that first Gentle Giant album made a big impact on me, too. The first four tracks are terrific – easily good enough to justify buying the album. All the trademark features of Gentle Giant are there: memorable tunes with multi-part harmonies, intricate rhythms, varied textures from the multiple instruments, sometimes soft, sometimes loud, always interesting.

As if to illustrate their versatility, in the next, nine-minute track, Nothing At All, there’s a gentle folksy song, classical and jazz piano, raw rock guitar and a drum solo worthy of Ginger Baker. All very clever but, in the end, not particularly memorable. The album goes downhill after that with a rather ordinary rock & roll piece and a self-indulgent rendition of God Save the Queen. But it’s all forgivable for those first four unforgettable tracks.

Ignoring retrospectives and compilations Gentle Giant released another 10 studio albums and one live album. Of those, Octopus, released in 1972, is generally regarded as marking the peak of the band’s creativity.

Somehow I managed to skip this golden period entirely. Perhaps it was because I had become thoroughly disillusioned with the contemporary music industry in the early seventies and had withdrawn to the safe ground of bands I’d already fallen in love with. Perhaps the disappointing tail of the first album put me off. Or perhaps it was because, when I saw them live some time around 1973, they seemed to be showing off too much. (Too many big-heads.)

Whatever the reason, nothing by Gentle Giant was added to my record collection until Free Hand, their seventh album, was released in 1975. By this time there was a confidence and maturity about their studio performances that captivated me once again. In contrast to the Gentle Giant album, which felt like a patchwork of unrelated ideas, Free Hand comes across as a fully coherent work. Here was a single piece in seven parts, each part blending different musical styles to great effect.

Skipping the next two albums (Interview and Playing the Fool: The Official Live) my next Gentle Giant acquisition was The Missing Piece. I was never quite sure about this one. It was a bit less complex and less original than the earlier material but it did get the occasional spin. It isn’t available on Spotify and I sold all my vinyl last year, so I haven’t been able to refresh my memory for this blog entry. 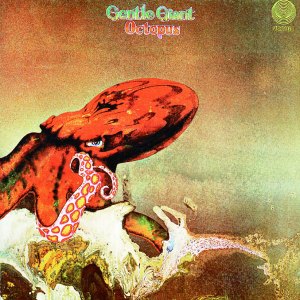 I have listened to Octopus for the first time recently, though, and I can see why it is regarded as one of Gentle Giant‘s best. It contains the brilliant Knots, a modern madrigal in which the vocal parts weave and wriggle around each other like snakes in a wicker basket. Absolutely mesmerising! So much so that I spent my last few UK pounds of iTunes credit on it.

Here’s to Gentle Giant, a band with a big friendly face and a big creative heart.